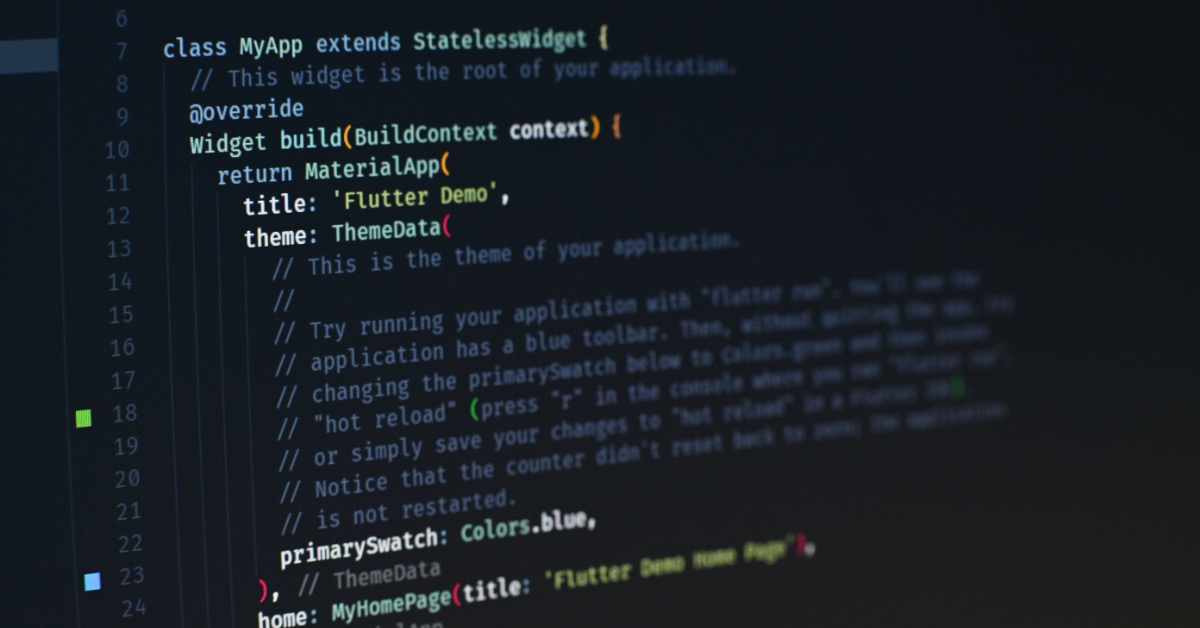 From time to time, every person who deals with coding might need a reminder of some concepts not used very often. In this article, I tried to cover as many essential Dart language keywords as I could think of. However, if you don’t find what you are looking for, please leave a comment - I’ll update this post if necessary. Have a good reading! 🙂

Let’s begin our dictionary with, I believe, the simplest section and, at the same time, the fundamental one. It contains keywords used for declaring variables in Dart and an explanation of the basic Dart types.

Map – maps are collections of key – value pairs. You can additionally specify variable type of keys and values

var – used to declare a variable without specifying its type. However, the variable’s type is declared by its first assignment.

Function – it is a base class for all function variables. As Dart is an object-oriented programming language, you may assign functions to variables or pass them as an argument to other functions.

The output of the code above is:

Hi, my name is Emma

null – every variable in Dart needs to have a type. You can declare variables with ? sign, which means they can be either the type you declared or null ex:

Since Dart’s null safety was introduced, you should use this feature. It will throw static errors for not initialized non-nullable variables. Null safety prevents the app from crashing unexpectedly.

final – a final variable is single assignment only. Its value can’t change.

const – a value of constant variable is not only single assignment, but also must be known at compile time.

required – used to denote named parameters, which should be mandatory to declare for an object. For better understanding, let’s establish a distinction between positional and named parameters:

positional arguments are required by default - You can mark them as optional. {named arguments} are optional by default - You can mark them as required. Below I created an example of Month class. It has three fields: positional parameter (required by default) days, required named parameter name, and one optional named parameter season. As we can see - it is possible to create an instance of a month without a season parameter; however, we can’t create one without days or name.

Experienced developers may be familiar with the concept of the interface from other programming languages, but it may be a bit challenging for beginners to grasp the idea. You may think of the interface as a way a project is organized - how classes interact with each other and influence one another.

class – if you are familiar with object-oriented programming concepts, then class is like a blueprint for an object. Inside a class, you can specify some characteristics, such as fields (variables), constructors, methods, etc.

interface – it is an object-oriented programming concept, a set of rules a class must refer to. In Dart, there is no syntax dedicated to declaring interfaces. The interface is set by the way classes are declared.

implements – used for implementing an interface in a class. Once a class implements another class, it has to override all methods and variables of the implemented one.

import – we use this keyword when we want access to any external libraries or other files from the project in our current file.

new – can be used when declaring a new instance of a class, but doesn’t have to - optional keyword.

and the output of the code above is:

part/part of – used for setting a better organization pattern of a library, splitting data into separate files. Using part, we have access to private variables of the main file, contrary to using import, when we have access only to its public members.

extends – used to create a more specific version (subclass) of an existing class. If class A extends class B (class A is a subclass of class B), all properties and methods of class B are also available in class A. We can also override methods. We can use another keyword - super to refer to the parent class. A class may extend only one class at a time.

super – used to refer to the parent class methods/properties.

start the car... engine turned on!

this – when declaring a new object of some type, you may run into the name clash:

As you can see, we have a name conflict. The instance ‘length’ has the same name as the class property, and Dart assigns a value to itself. That’s the reason this keyword was introduced - to describe properties of the current instance:

Side note: it is recommended to use initializing formals when possible. For further info, please visit this guide

mixin (on) – used to reuse code in multiple (possibly different level) class hierarchies. It allows the use of other class code without being its child. You may define mixin just like a normal class or using mixin keyword. By adding “on”, you can restrict mixins to be used only with certain classes.

with – used on mixins, similar application to extends or implements.

extension – used to add functionality to already existing libraries like classes. For example, you may imagine a situation in which, for whatever reason, you’d like to create an extension that multiplies variable of type int by two. For this purpose, we can simply write:

and in the console, we see:

factory – used for creating constructors that don’t always return a new instance of a class. The typical application is to generate objects from json data.

after running the code above, we confirm that the factory constructor works by reading from the console:

operator – used to override default Dart operators inside a class. For example, hypothetically, you may want to check if one month is longer than the other without accessing its properties directly. In that case, let’s override > operator for class Month:

as May is a longer month than June, this code outputs:

covariant – its typical application is to disable static error when overriding a parameter’s type with its subtype. In the example below, without a covariant keyword, we would get an invalid function type override error (due to different object types).

the output of the code above is as expected:

Welcome Robert, how can I help you?

enum – it’s a class designed to define a fixed number of constant values. It helps avoid typing errors when working with the same values in different places of the app.

get/set – so called getters and setters are methods that provide read/write access to the properties of an object, outside of the class.

show/hide – used for selective imports. Use these keywords if you want to import just a part of the library to your file

Control flow statements are the core functionality of Dart and many more programming languages. They execute conditional code procedures with looping that allows iterating through the code. Every Dart/Flutter trainee gets familiar with them at the beginning of their journey.

if – together with while, for, and switch, they are the basic conditional expressions in Dart. Using an if and optional else statements lets you control the flow of the app. “If” can be used for multiple purposes. You can use it inside a function, generate UI based on state, or navigate different routes depending on some condition.

else/else if – typically used together with if statement, placed after the first if block to specify instructions when the first constraint isn’t satisfied.

and the output of the code above is:

do – used together with while works the same way, just the syntax is a little bit different - first, you declare the code that has to be executed and only afterward the condition.

Below are shown two code snippets, the first one is while, and the second is a do / while loop - both with exactly the same output:

switch – used in a similar way as an if statement; however, switch has a little leaner syntax. It’s typically applied in places with one simple condition.

case – used inside the switch statement. As the name suggests it separates cases. Works similar to else if in the if statement.

default – used to handle a default (unimplemented) case in a switch statement. If you are not 100% sure that the cases in the switch statement cover all possible scenarios, you should use the default case to ensure error safety.

Below an example of switch statement with other keywords:

and the output is:

Let’s now focus on keywords you may need while working with code that needs to run asynchronously.

async – placed before a body of the function allows for asynchronous operations. Usually used together with the await keyword. async functions usually return Future object.

await – used as a signal for the asynchronous function to wait for the result of the operation, which is directly after this keyword.

return – indicates the place in code where an async function should end. After return, you can also specify what should be the output of the function. Return value needs to match Future

async* – similar to the async keyword, the difference is that the same way as async functions return Future, async* function returns Stream - a sequence of events.

yield/yield* – it is a stream equivalent of Future’s return. yield is used to add result (an event) to the stream which is an output of the async* function, and yield* can be used to insert a series of elements, as there was yield for each one of them.

try – try/catch workflow was designed in order to allow for execution of code without having to care about exceptions. First, the method runs the try block and if it encounters an error - it jumps to the catch block.

catch – when there is an error in the try block, catch is the place for the developer to handle such an exception.

on – can be used to handle a specific type of error.

finally – part of the function, which runs in both cases - if there was an error and if there wasn’t one.

throw – used to throw an exception (can be a custom class)

assert – used in a pattern assert(condition, message). You can add asserts to stop execution of a program, when the condition specified returns false - then display a message in the console.

this code outputs an error:

Uncaught Error: Assertion failed: "no point in dividing cost for just one person"

In the end, we are left with keywords commonly used for casting/checking an object’s type in Dart and declaring new types.

as – together with is, it is used to check objects’ types at runtime. Use this keyword for casting only these objects, which types you are sure of.

is – contrary to as it is used for checking the type of an object you are unsure of.

typedef – keyword used to declare new types as a combination of already existing ones. You can later use it together with is keyword to check if your variable is of the correct type.

Thank you for reaching the end of this article. I hope you found it, or at least a part of it, helpful. If you wish to continue exploring the Dart language, I encourage you to take this tour. You will find much more knowledge there. To get familiar with the recommended approaches and good practices when working with Dart, it is worthwhile to read through this guide. And if you are only starting your programming journey - be patient and push on. You’ll get there eventually :)

In 2021 I made my best decision - leave Civil Engineering behind and start coding. Since then, thanks to Flutter, fulfilling myself in mobile app development. Fan of animals, traveling, music and modern architecture.

What You have to say about this - don't hesitate to comment :)